Shorter in stature but still long on beauty, dwarf English delphiniums greet the world in Oregon
By Kym Pokorny 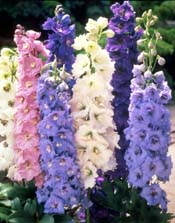 Tall, leggy and beyond beautiful, delphiniums already reign as the supermodels of the garden. So how could they get any better?

That’s right, gardeners tend to be intimidated by the statuesque bearing of the delphinium’s spires. Never mind that the petals look as if they’re made from the finest velvet or that the range of colors could rival the wardrobe of Cindy Crawford.

At 6 to 9 feet, delphiniums are just too tall for most gardeners who are making do with less space than prior generations.

So, with the proper amount of pomp and circumstance, Log House Plants in Cottage Grove is about to roll out the world’s first dwarf delphiniums under the name ‘New Heights.’ Bred in Holland from the hardy English delphiniums, the new strain will hit retail stores this spring.

“We are enthusiastically going to stock them,” says John Blair of Tualatin River Nursery. “We’re very happy to have them available because in the case of English delphiniums, people absolutely love them. But even though they’re as strong as rebar, they have to be staked and if you get a stiff wind, they could still snap.”

The new dwarf varieties, which grow from 3 to 4 feet, are more resilient and less in need of staking. Best of all, they produce the uniform flower spikes and the extraordinary range of colors, eyes and bees that the English delphiniums are known for.

“There really is no difference besides the height,” says Alice Doyle, co-owner with Greg Lee of Log House Plants. “They’re not losing any of the characteristics of the true majestic English delphiniums. They have all the incredible colors, the true blues, the mauves, the iridescent violets with weird colored bees . . . everything.”

The fact that the new dwarfs are being unveiled in the Northwest before anywhere else is testament to Doyle’s enthusiasm about these plants and her dogged persistence when it comes to what she believes in. “It’s the challenge,” she says. “When you’re a plant nut, you get obsessed with unlocking the story behind the plant.”

This particular story starts back in 1994 when Doyle was turned on to English delphiniums by Portland gardener Chuck Smith, who’d seen an article. Until then, this old and very strong strain had been limited to Great Britain because they’re propagated by crown cuttings rather than seed, and crowns could not be exported.

But amateur breeders in Britain had been painstakingly hand-pollinating their delphiniums and were more than ready to help Doyle show the world what it was missing. Even though seed can only be collected from the first year of a cross in order to maintain the plant’s vigor, Doyle was able to get hold of 700,000 of the handcrossed seed. By 1996, Log House was growing and supplying English delphiniums to nurseries throughout the Northwest, and gardeners were eating them up.

Blair sees the same thing at his Tualatin River Nursery. “Gardeners who grow them, love them. They ask specifically for them.”

Which bodes well for the ‘New Heights’ dwarfs, which better fit the scale of a smaller plot.

“I think there will be a big commercial market for these plants,” says Duncan McGlashan, a retired English research scientist who has been handcrossing delphiniums for 40 years. “Years ago, we breeders were being shortsighted. Even though we grumbled that no one grew delphiniums, the average gardener was not interested in growing tall plants that take a lot of looking after. To be fair, they haven’t got the space.”

It’s taken some time and a surge of interest from other countries, but gardeners are finally getting what they want. Both New Zealand and Holland have jumped on the bandwagon in the last several years, breeding new strains from the English delphiniums. From New Zealand comes the ‘New Millennium’ series, developed for heat and humidity tolerance. The Dutch-bred ‘Centurion’ series offers even bigger spikes with more florets and deeper colors.

The first dwarf was spotted in Holland about five years ago in a field of English delphiniums being grown for cut flowers. A naturally occurring sport that looked like a sumo wrestler dressed for an Easter party grabbed the attention of a Dutch hybridizer, who began handcrossing it to named varieties to come up with a whole new strain.

“It had the same strength of cane, that thickness that’s so important. And the same huge florets . . . like a miniature version of the 7-foot English delphiniums they had growing in the field,” Doyle says.

Fortunately she knew the hybridizer and was able to convince him into giving Log House the world exclusive. As a bonus, Log House got to name the new series.

So now the supermodels of the garden have new runway competition. Isn’t variety nice?

Reprinted from the Oregonian’s Home and Garden section, March 22, 2001.

Why would a home gardener want to hybridize her own plants? “The joy of painting with DNA,” says Alice Doyle, co-owner of Log House Plants. Less poetic but more to the point, Duncan McGlashan, a British amateur delphinium breeder, says it’s the joy of developing something all your own. “It really is very satisfying thinking what you’ve got is original. That’s the appeal.”

Breeding delphiniums takes patience and persistence. Here’s what you need to know to give it a try:

– First a little botany lesson: The delphinium plant reproduces when pollen from the anther (the male reproductive part) is transferred to the stigma (the female reproduction part) and moves down the style to the ovaries, where fertilization takes place and seeds develop. You’ll be able to tell the anther from the stigma because the anthers will be covered with fuzzy yellow pollen. Both occur on the same plant.

– Start with two named varieties (parents) from a nursery and label them.

– Decide which will give pollen and which will receive (mother plant). When plants begin to bloom in June or July, begin stripping anthers off the mother plant (so that it doesn’t pollinate itself). The florets open from the bottom of the stalk up, so work from the bottom up until all florets have opened and you’ve removed all anthers. Don’t get behind on this process because the stigma become receptive early on and you don’t want the plant to pollinate itself. Once the plant starts to bloom, the process of hand-pollinating can take up to three weeks.

– Stigmas are ready to receive pollen when the tubes of the stigma swell slightly like an umbrella and get a little sticky in order to attract the pollen. When you think stigmas are almost ready, pick the florets from the other parent plant (the ones with anthers), put them in a box and move indoors for a day or two to dry. When stigmas are ready, brush pollen from anthers onto the stigmas. Either pull back the petals from around the anther and dab pollen onto the stigma, or use a small brush to transfer pollen.

– It’s a tedious task, but in order to get a pure new variety, you need to pollinate all the florets on a spike. To be sure you’ve pollinated when the stigma is receptive, you can brush on pollen more than once. McGlashan usually does it three to four times.

– If you’re working with more than one pair of parents, wash your hands before you move to a different plant or you may mix pollen and your cross won’t be pure.

– It takes about three weeks to get ripe seed. Once seed is ripe, collect it and germinate right away or store in refrigerator in paper or glassine bags inside a closed jar. When ready to germinate, put jar of seed in freezer for five days. Then sprinkle into sterile planting mix and cover lightly. Put container into a bigger container that holds water so moisture can wick up. Spray top of soil with water. Keep in dark and they should germinate in about 10 days. Once they come up, move into the light.

– The next year when your new plants bloom, choose the one you like the best. Cross that with a named plant that has the characteristic you want. Sooner or later, you’re sure to get something wonderful.

Reprinted from the Oregonian’s Home and Garden section, March 22, 2001.