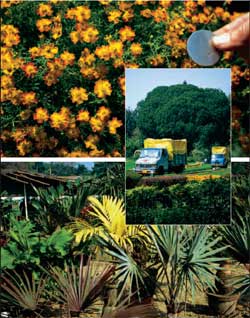 In February 2005, I embarked upon an adventure that can only be called extraordinary! Alice Doyle, of Log House Plants in Eugene, Oregon, asked me to join her, Kees Sahin and Derry Watkins, from Special Plants near Bath, England, on a trip to Calcutta, India. For many years we had been pressured by Kees to accompany him to the Calcutta Flower Show, held at the Agri-Horticultural Society of India, which was established in 1820. As it turned out, this standard, amateur flower show had been running for 185 years, and even more surprising, all four of us ended up being judges! An afternoon flight from Bombay brought us to Calcutta late in the day, so it was followed by a taxi ride into town at dusk. There is little in this world as strange as a wild, Ambassador Cab ride into an immense city, engulfed in darkness and winter haze, with taxis, trucks, minivans, man-drawn rickshaws, carts pulled by most types of fourlegged herbivores, and thousands of people everywhere. Several friends had told me Calcutta has a particular odor, and it does, but it is more the scent of presence—of dust, water vapor, coal smoke, diesel and car exhaust, and wood smoke. In some areas, the odor of hot tar—being heated for roadwork in big metal drums over wood fires by the side of the street—is added to this mix. It is an unforgettable combination of scents, an almost touchable taste of the city.

Calcutta is a city of immense parks, canals and neighborhoods with complex street layouts or wide boulevards—some lined with large trees. It also has over ten million people, most of whom seem to be out in the streets and on the sidewalks at all times. In the Maidan, the main city park, we visited a book fair where stalls, about 20-by-20 feet square and almost as tall, were constructed with doors, windows and shelves, and held, seemingly, millions of books. The fair covered about 45 of the park’s acres, was in progress for a week and attracted 800,000 people. Yes, I found a couple of books to bring home. Calcutta is a city of contrasts. The most apparent view of these differences encompasses the contrast between the lives of people who really do live on the streets, sleep in tents and cook on open fires, and our experience at a Flower Show party held at a mansion with a wing for servants, three of the most perfect cows I have ever seen, and extraordinary food (including saffron ice cream!) I expect never to taste again. All of the party’s delicacies—at least 30 different dishes—were prepared right there in front of us, with every item served on a separate china plate.

The Flower Show Site The morning before judging the Flower Show, we stopped in at the Agri-Horticultural Society’s offices to be introduced to Kees Sahin’s friends. During our visit, we actually saw the 185-year history of the event, as initially documented in a journal written by the first secretary of the Society, then continued, handwritten in script, in large, 2-inch thick, ledger-size books, and in English (as the show was started during the Raj, the English colonial period in India). We wandered about the Society’s garden that morning, primarily admiring useful plants—tropical fruits and hardwoods—and some purely ornamental plants, vines, orchids, ferns and palms. There were also curiosities, such as the baobab (Adansonia digitata) and the elephant foot tree (Pentace species), some bizarre euphorbias, and a tree with no two leaves the same shape (Pterygota alata ‘Diversifolia’). Next on the agenda was a look at the Flower Show site—a grassy, flat field with flat-topped, open, covered structures for the cactus and succulents; an opaque, poly-house set up for cut flowers and children’s arrangements; a rather ornate shade house, covered with bright, Kelly-green netting, for the display of orchids and ferns; and a square pavilion set up in the middle of the field to display about 10 elaborate floral arrangements, quite similar to those at Chelsea. Three sides of the field were bordered by green and white plastic fencing, about 15 feet tall— a very odd backdrop for dahlias and other potted, large-scale annuals. White clothcovered tables were set up for bonsai of extremely high quality, created from tropical and sub-tropical trees and shrubs, ranging from Ficus to tamarind.

We judges gathered the next day at 9 a.m. at the judge’s platform—a tent with no walls, but a veritable living room with couches and end tables for us to use while being instructed and taking breaks.

Each of us was placed with one or two local judges and given one or two show sections to judge. Alice Doyle had annuals, individual and grouped. Derry Watkins was assigned to displays of annuals and a category that included what we call hardy annuals—those that might over-winter in England or in the Pacific Northwest. My categories included vegetables and “herbal medicinal plants.”

The individual vegetable group was most interesting and included some extraordinary entries, all grown in 12-inch pots:

• A big, white, daikon-type radish: with about 8 inches of arm-sized root above soil level; woody with a few cracks on the backside, but with perfect foliage.

• Bitter melons (Momordica charantia): some warted and green; some, over 2 feet long and black; and some orange and ripe with seeds artfully left on the soil, just as they had fallen.

• Four entries of luffa-type gourd (Luffa acutangula)—yes, they are eaten: hanging, as were the bitter melons, from circular trellises in the pots. (One of the local judges I worked with stuck his thumbnail in the skin of a luffa and pronounced, “Not edible quality.”)

• Bean: one small plant with one bunch of beans.

We awarded a “First,” “Second” and “Special Mention” in each category. Among the vegetables, our “First” award went to the long, black, bitter melon.

The herb section was more complex. Herbs were potted in groups of four and included some very unusual plants. There were two woody basils I had never seen, and several plants I could not identify at all, but the judges I was with knew even less than I did, which seemed odd. Afterwards, Kees identified the basils. The most unusual plant had long, purple leaves the size of summer savory, and scattered, tripled arrangements of pure white, stiff, sharp thorns. We never figured this one out but did later see it in the wild. There was an Aloe vera plant in almost every group and a few other succulent-like plants, but most of the herbs were woody or semi-woody shrubs. Awards in this category went to the groups of plants that were best-balanced and looked best overall.

At the Flower Show, we did find a few plants new to all four of us, including one Alice is trying to find seed for—a bicolor, miniature marigold (Tagetes tenuifolia). There was also a pale blue lupine of good form, the two bush basils, a good color form of Calendula (similar to ‘Coffee & Cream’), and a white, cutflower Centaurea that smells of chocolate. The most striking flowers at the Flower Show were the giant dahlias—a local specialty—and we even met one of the breeders. Some flowers were almost as large as a soccer balls (regulation size!) on disbudded plants no more than two feet high. Some of these were displayed in triangles, dug into the turf so that arrangements were canted toward the viewers, the triangle’s point first; and even these plants were grown in 12-inch pots!

After judging ended, we went to the Calcutta Botanical Garden to see the world’s largest banyan tree, Ficus benghalensis— 250 years old, covering more than two acres, and held up by hundreds of “stilts” formed by aerial roots that reach the ground. The botanical garden was immense, with wide avenues and a collection of mostly large tropical trees and palms. For a small fee our taxi was permitted to drive into the park. There were giant water lily (Victoria amazonica) youngsters in many of the canals and ponds in the park.

The last of our horticultural adventures in Calcutta was our visit to the main flower market at the base of the Howrah Bridge, built in 1943. At 2,313 feet, Howrah Bridge is the third-longest cantilever bridge in the world, but no photos are allowed. The most common flowers for sale were individual French marigolds, mostly yellow and orange, loose, or strung as decorations for weddings or religious use. The market was composed of a street crammed with vendors and a covered area packed with stalls. There were no straight lines, some one-person-wide aisles and truly millions of flowers: marigolds, double and single tuberoses, edible chrysanthemums and annual bachelor buttons. Often these were in large, woven plastic bags, 3 feet square and 3 feet deep. The bees on the tuberoses were a bit scary but very preoccupied. Ten kilos of French marigolds of mixed color sold for about $1.20—the same as for a 39-stem bundle of lotus flowers in tight bud.

Although we went on to Darjeeling and Gangtok, the Capital of Sikkim, after our stay in Calcutta, our first experiences in India remain colorfully memorable.

BOB LILLY is a former board member of the Arboretum Foundation, chair of its spring plant sale, FlorAbundance, and co-chair of its Fall Bulb & Plant Sale.